Looking back it has been a full couple of weeks. Tonight as I went to get Joy during her crying fit, (teething, why do you hate me?) I had the thought, "We've come a long way, baby." She's learning so much and wanting to be big like her brother and sister and is nothing like the little baby that I used to worry so much about. She's a go-getter and, at least for now, a momma's girl. I thought I'd take our picture to show you what we really look like. 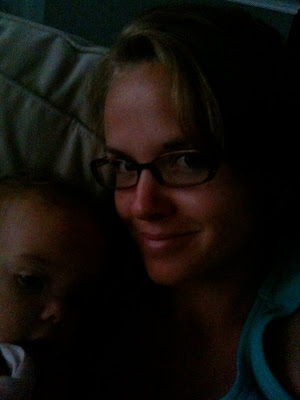 We are really really dark in real life. And one of us wears glasses since one of us has contacts that give her headaches now. You've heard how pregnancy can change your vision? Apparently a few back-to-back ones can really confuse your eyes. I've gotten a new prescription but even those give me headaches by the end of the day so my glasses have gotten some good wear lately. Joy is great- back asleep now thanks to Motrin and Orajel. I, on the other hand, seriously could do without the teething process. 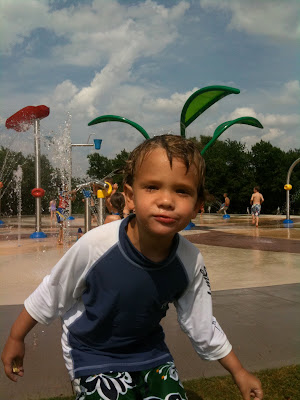 Oh how he loves water and anything shooting water at him. Today was his end of the year party at school and he was given the "Most likely to become a rock star" award. Loved it. 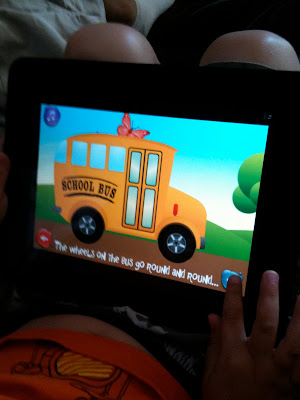 The iPad is really neat. I mentioned (tweeted) about it a few days ago but never mentioned to y'all that I saved a lot of money and bought one for Sean for Father's Day. I didn't save enough to cover the whole cost of it but it was fun to give it to Sean and tell him that I'd secretly been stashing away money to get him his ultimate gift. He's not the only man in the house who LOVED it. The little pudgy hand you see is Ty's. He can totally work the thing and as long as he sits on the couch and promises to scream with all his might if Joy comes near him we let him play a few games on it. Since he screams anytime Joy comes within a ten foot radius of him I felt pretty good about that. 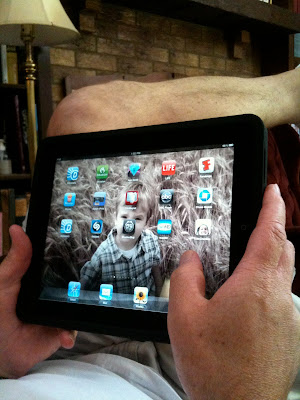 It is a really cool gadget and I think Sean has never loved me more. 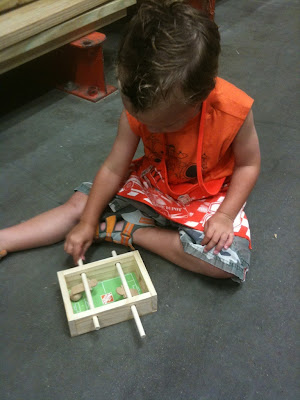 Last weekend, (really, do I even blog anymore? I feel like I'm way behind,) my boys went to Home Depot for the workshop and made a soccer game. SO cute and Ty can play it by himself. Charlie would love to play it with him but Ty has other plans: not doing that with her. 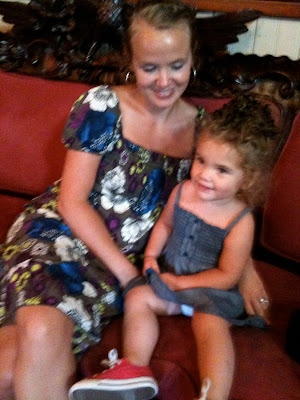 Charlie and I went to a celebratory dinner with my family on Friday night because, well, even though I don't have the official picture to show you, Emmy and Ethan got married on Friday. I know, I know, I've been a bad sister not mentioning it until now but in a way it feels like they've been married forever since they're such a good fit and also Sean forgot to edit the pictures that he took of the two of them before he went to work. What is he thinking????? iPad that's what he's thinking. It took over his brain. He will edit them soon and you'll get to see how cute they are. Pretty cute. Since the celebratory dinner was in Arlington on the tail end of rush hour, I only took Charlie with me and left Master Ty, Joy and Sean at home. Those two (Ty and Joy,)are no good with late night events. Lots of sadness follows them wherever they go. Charlie loves people and attention, (it's a mystery, really, where she came from,) so I can bring her almost anywhere and she can last. She did. Until approximately 7:21 p.m. when she told me she wanted to go home and go night night and laid her head in my lap. Ahem. Apple fell right under the tree on that girl. 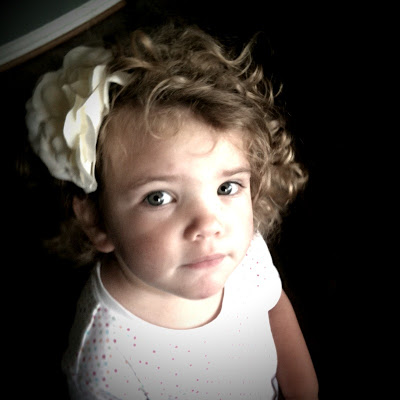 Awww love her. Love her cute headband. Wish she would wear it for longer than 4 minutes. 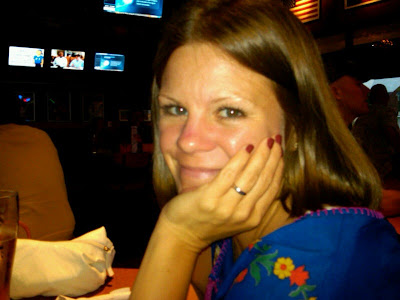 Here's the only married pic I have of Aunt Emmy. I promise I'll post more soon that actually include the groom.
Don't forget to enter the giveaway on the last post...no need to go to the separate giveaways page because this isn't a sponsored one. Just wanted to share the earring love!
Posted by Mary at 9:26 PM

excited to see pics of ethan and emmy after the ceremony. :)

i totally laughed because when you sent that text last night i was already asleep and didn't get it until this morning. you outlasted me for a change! i love how charlie tell you she's ready for bed.

joy is a go-getter! teething does suck, though!

All I want to know is where you got that awesome dress????

I think that pic of Ty is so cute...but its funny to because it looks like the tree is coming out from his head. :)

Ha! Okay Em I got that dress at Ross two years ago for $10. I still love it because it was my first dress purchase after Charlie was born! Hides the tummy very well :)

Carley I thought the sane thing seeing it on the blog. Weird how it lined up so perfectly!