Wow I'm tired. We left for Boston early Wednesday morning and got back Friday night. Well, I got back and Sean kept working until last night so now we're both (all) home and trying to get back in our groove. While I was gone Ty mastered eating with a utensil, Charlie started teething again--have I mentioned that I'm gonna have a talk with God about why He didn't just give babies teeth at birth--we established that I am not flying material, especially standby flying material, Ty got about 20 mosquito bites in spite of Mom coating him with OFF, Charlie seems interested in moving around, saw Fenway park, walked around the Boston College Campus where Emmy spent her Freshman year in college, rode the T for a combined 200 miles, (okay maybe that one is an exaggeration,) and I got to sit in the cockpit of a MD88 with my man and learn exactly what he does to keep the plane in working order. Whew, see why I'm tired?
I've wanted to see Sean work for a long time and this looked like the opportunity. I rode with him to Atlanta and on that flight I was doing ok until the plane lost a generator. In Mary terms that means we were flying along just fine and then all of a sudden the TVs went off, lights flickered, and the plane jumped up for a few seconds. Then the flight attendants quickly put their stuff up and whispered for a few minutes before we knew what was going on. In normal Mary fashion I imagined one of the pilots was having a heart attack and we would be landing shortly. The captain came on to tell us what happened and Sean just shook his head and said, "I am on hundreds of flights a year and this HAD TO HAPPEN  on the one you were on." Yep, I am always in the 1 % of the ratio. Not supposed to get the disease? I'll get it. Won't happen to you? It'll happen to me. I'm like a medical question mark. My file at my OB's office is about 10 inches thick. I'm not kidding I've seen it. It has red flags coming out on the edges.
The rest of the flights were bumpy (weather all up and down the East coast,) until the last one from Atlanta home. That one was fine. Earlier that morning when I boarded in Boston I walked to my window seat to find that since it was the last row on the plane there was a spot for a window but no window. After all, the engine is right on the other side of the seat. I started panicking and stood up and asked if someone would be Jesus and switch with me. For twenty bucks. I was shaking--one of those times when you can't talk yourself out of what you're feeling though you're desperately trying to. I anticipated the worst and starting tearing up when a man threw up his hands and said, "I'll switch with you, keep your money!" Then I started crying. Really crying. I'm a full-blown adult and that man became my hero. Later I told him I probably would have given him my credit card if he'd wanted it. Sean didn't think that was funny :)
The kids had a great time as usual and enough babbling: here are the pictures! 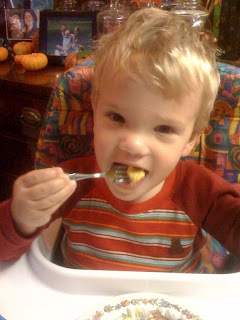 I remember using this same fork when I was little. He looks so proud of himself. 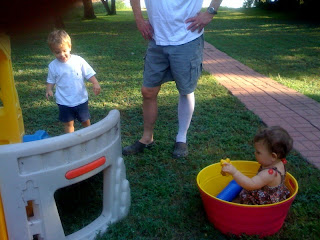 First, my dad is wearing a stocking--he didn't just get confused about socks. He had/has a blood clot in his leg and this helps with circulation. Not that Dad is fashion-conscious at all, but this time it really is a medical reason. Mom parked Charlie in those buckets because she's in the phase where she throws all of her toys around so this contains her/them. Ty loves this slide at their house--can do it himself and even hikes his leg to get to the top of it so he doesn't have to climb the stairs. 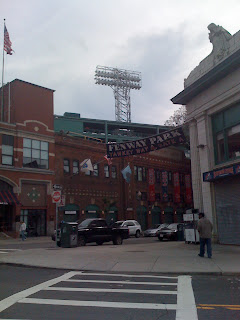 Fenway. Makes me think of so many lines from Field of Dreams. "Is Fenway the one with the big green wall in left field?" The Red Sox had played a game the night before and it was cleanup city when we visited. 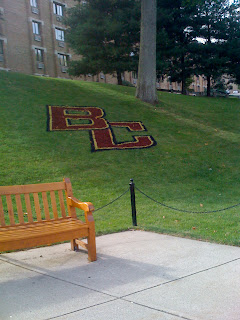 Boston College, where my sister spent her first year of college. I don't know how she did it. I was so tired after trying to find the bookstore to get her something that I couldn't make it up the mountain (okay hill,) to find her dorm. She was 18 years old and moved from our small town to Boston. By herself. I've never thought she was a wimp but that seals the deal: she is tougher than I am. I could have never done that! 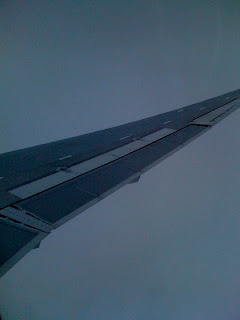 My view from my window seat that my hero gave me. There are clouds all around because we flew through rain the whole flight so where I would have normally been freaking out I was soooo relieved to be in that seat instead of the alternative. It's amazing how something that small can change your perspective! Sean is my hero in a new way after this trip too. I experienced a little bit of what he has to do while working as well as getting to and from work. Commuting to Atlanta is his life story right now and he doesn't even really complain anymore. He has to know what every button in the cockpit does without thinking about it and there are about 400 buttons. I can only imagine how excited Ty will be to see the same thing when he is older!
Posted by Mary at 9:43 AM

Why aren't the comments working?

Just to be clear, I am not THAT obsessed with comments but three of you five readers told me they tried to leave comments and they wouldn't work!

Great Post! I'm glad you had a good time. :) Your airplane stories are even funnier written out!