This might take a while so get comfy. What a wonderful trip! Let's start with the weather--perfect. 70 during the day and in the high 50's at night. Coming from the "cool 90's" at home it was a welcome change to need jeans which, by the way, I had only one pair of. I brought them in case of an emergency in my carry-on sized suitcase. I was ok taking the very small suitcase as long as Sean agreed to put anything I accumulated on the trip in his bag for the ride home :) Anyway the jeans--wore them every day almost all day. They're tired. The shorts/skirts that I took I am now wearing since back home even in the midst of a rainy week it's still in the "cool 90's." Ah hemm. So here is a picture of the perfect weather on the beach. My advice to any native Texan who only travelled to Galveston or Corpus Christi as a child: the water is not the same in California. It is pretty. And blue. And freeze-your-extremities-off cold. You're gonna need a wet suit my friend. 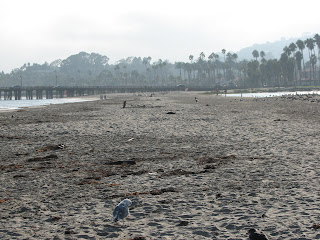 Day one we landed at LAX around noon (CA time,) and went straight to In and Out burger. Because that was naturally the # 1 attraction and reason for going on this trip. It didn't disappoint. That was the first of I think 5 meals that day and like I said we got there at noon. Glorious. We checked into our hotel, a nice old hotel on State Street. We were told old movie stars used to stay there and we have no reason to distrust our new friends for life who run the establishment. All activities from the rest of that day are a blur thanks to Dramamine and sleep deprivation. It was fun let's just leave it at that. Then the next day this happened. 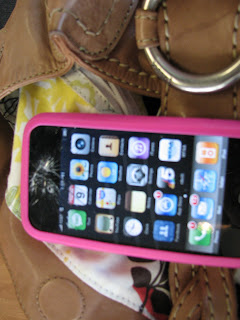 I killed my phone. You can see on the left side (the top of the phone,) looks like someone shot it with a bb gun. Or just a small but weight-bearing foot while trying to change drivers at a red light. Yup, I killed it. Damper on an otherwise perfect trip. 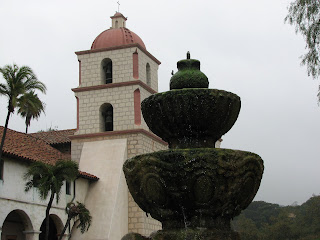 But then we went here to the Old Santa Barbara Mission. I'll have another post full of pictures soon. It was a beautiful place. Many stories hidden in the walls there and we really enjoyed seeing it. My last picture is of the end of State Street, where it dead-ends into the street that runs along the beach. During the day we walked along and rubbed shoulders with many interesting (to say it nicely) people...some of whom you'd rather not rub shoulders with. If you've been to Boulder, CO in Whole Foods, you can picture what I'm talking about. Lots of unwashed hair and bodies :)  Everybody we encountered was happy though...that's something, right? It would be hard to have a bad day in Santa Barbara. I can see why Sean loved living there. I'll add a more pics over the next few days of some of the old stompin' grounds that I got to visit--Sean's old apartment that he shared with 3 other pilots during his first year with SkyWest, his old church, his favorite restaurant that he only went to about once a month because he made less money than I did as a counselor and that is NOT A LOT! I am so thankful to have gone with him to such a pretty place. 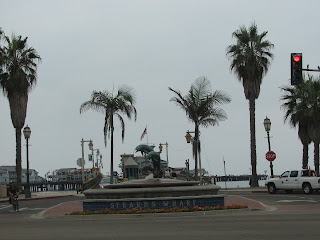 I was constantly on the look-out for celebrities--apparently Oprah and Michael Jordan have houses in Montecito--no such luck. We did see Eric Estrada (CHIPS) at LAX on our way out of town.  You young'uns won't remember that show but anyone my age or older will appreciate him. He was really nice to everybody, (especially the security guards and their dogs who escorted him off the plane???) so technically I did see somebody famous.  I was happy and after seeing the kids this morning for the first time in more days than I've ever been away from them, I still am.
Posted by Mary at 5:39 PM

Very fun pics my friend!! I am so glad that you guys got a little gat-a-way together! Excited to see more pics on the next post. :)