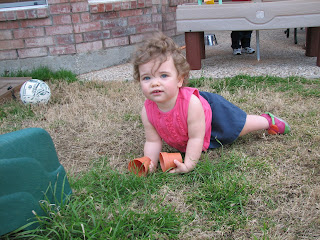 In the early weeks of Charlie's life, I called her "stinky" because she pooped about 20 times a day. I know that's "normal," but Ty didn't do that and it threw us all off a little bit because literally every time she was awake she was going potty. So that was her first nickname and Sean kept begging me to change it.
After a few months she stopped doing it and became "Bean." I don't know why but I do still think of her as that often. Little jelly bean maybe? She was kinda shaped like one for a long time?? Anyway, "Bean" will always apply but now I have a new nickname for her and this is why.
See the picture? How she's crawling on the back of her hands? She does this anytime she has a toy in her hand/hands that she doesn't want to give up. Which is a lot of the time because in her world if you give it up your brother will probably take it. Who said she wasn't smart just because she didn't feed herself or drink out of a cup or crawl or walk or do anything until she was well over a year old?
She figured out the important stuff like holding onto toys early on. So everywhere she goes, inside, outside, (even on concrete,) you just might find her crawling on the back of her hands.
So meet "Monkey." She is now walking everywhere, feeding herself, drinking more than her brother which is A LOT--all out of a cup--and she only crawls to get to something to pull up on...but inevitably she has at least one hand folded over like a monkey with something in it. She has scabs on her hand right now because she will cross any terrain like this and never fusses about it.
Last night she had stolen some of Ty's alphabet puzzle letters and took off up the stairs on the backs of her hands. I need to record it and post a video for you. Now if I could just figure out how to do that...
Posted by Mary at 7:22 AM

Too Cute! She's loving her freedom of mobility!

Sounds like a VERY smart girl! I love the stinky name. Brody was the same way, he pooped all the time. Kate has thrown us for a loop because she goes maybe once a day and it is a blow out. Justin preferred the going often over the blowout! I had to call the doctor to make sure that was normal! Boy can these kiddos throw you for a loop!

That is hilarious! She is such a doll, Mary. I love those big, beautiful eyes! Maybe I should learn to scoot like that also...then I would never have to give up a book, my diet dp or any of my other favorite items.

I feel ya on the well over a year thing. Our health visitor here (aka nurse) told me both her kids sat in the middle of the floor, doing nothing, for 14 1/2 months! She called it "contemplative" and that they were learning. I'll admit I was taken in by the positive spin on pure laziness. :)