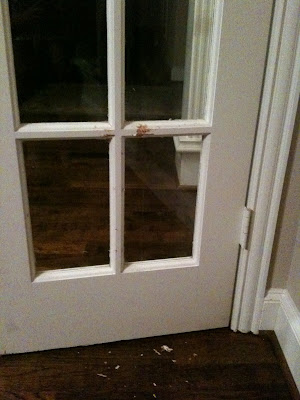 I wonder what happened to the door while we had friends over. Could it be my saint of a dog (ha!) had an anxiety attack again? 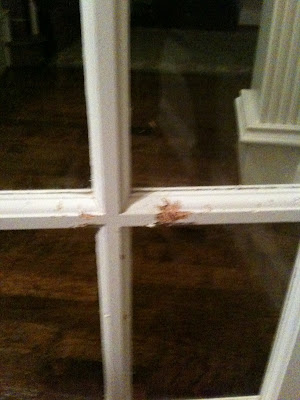 Why yes that IS what happened. While his Daddy was on a trip no doubt...and he had to deal with his Momma who locks him in an office because it was too hot for him outside and the baby was in the room where his pen is. His Momma told his Daddy what he did hoping for some sort of boot camp vacation in his near future but so far no word on sending him away. 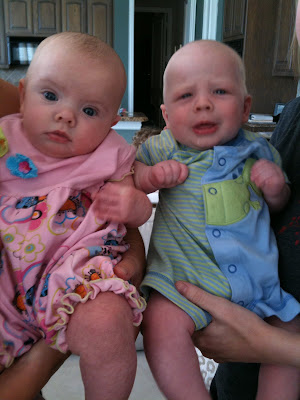 I wonder who is the cutest three month old baby? IT'S A TIE! Joy and Mr. Cody having a little date at my house. Cute cute. Until... 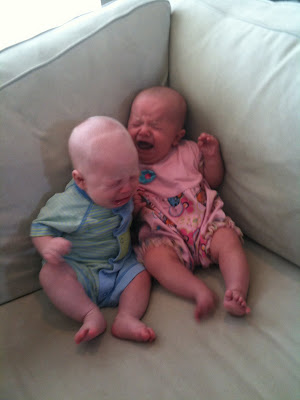 I wonder what in the world can be so upsetting they have to use their whole bodies to express their sadness. 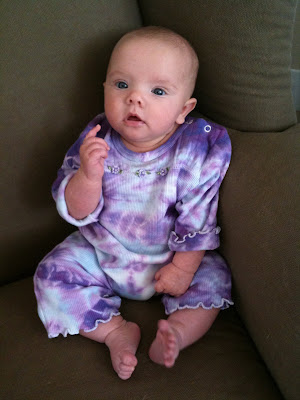 I wonder if they were serious when they told me my new bedroom is their closet. Yes, wee one, we were. Until you can sleep like your sister, your future roommate, you will get cozy in my fabulous closet--a selling point for our house because it is so big so don't worry--and you will have all the comforts of home. Your Momma will take a picture later to show our friends here your new place. 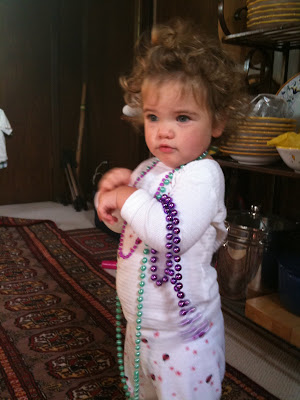 I wonder if she learned that face from me or her Daddy?
I wonder what she's thinking...maybe, "No you MAY NOT take my picture!" Or maybe, "Am I the best thing since frozen waffles or what?"
Jury's still out on her sassiness. I think it's palpable.
Posted by Mary at 8:50 AM

Cute post! i forgot about max eating the door...hope sean wasn't too mad...then again, i know you were hoping he'd send max away. ha! love the pics of the babies...i'll have to put those on my blog too. and charlie...she's too much and so sassy. it was fun to "hear her talk". love the babbling.

Yeah... I think Charlie's self-esteem is pretty high. We don't have to worry about that for now.

ahhh, my old pug dog used to have horrible anxiety attacks when i would leave! i'm sure that was a happy moment to come home and find the door eaten! :)

Love this post... the picture of Charlie made me laugh out loud! And no worries, I'm sure Joy is perfectly happy in her little nook.

The other day, our dog got out (in the rain) as I was buckling kids in the car. I came ridiculously close to just leaving him. Thankfully, he made the choice for me and came trotting back into the garage after I'd gone to grab an umbrella.

And we'd love to come hang out! I'll find out how things look for Nathan and let you know!

Love the picture of the kiddos crying on the couch. My friend and I would laugh that we would continue taking pictures even though they were screaming their heads off. Anything for a photo opportunity. So cute!

We have to get the families together sometime soon. I bet the kiddos would have a blast together!

Cute, Cute!! Funny story...my Dad is a Pharmacist and just this past weekend he was telling me that he fills a LOT of valium (sp?) for Dogs. He said the instructions are always "Take one pill as necessary when Thunders."...LOL!