I don't have a picture of the ceiling. Sorry. I do have pictures of the kids though. Are you still mad? That I didn't show the leak? See, I believe women don't really care about that stuff as much as men do. Sean and I have a Sonic drink bet about this so y'all back me up. We don't really care about seeing something like that-we just want to know if it's gonna, you know, mess up our activities and/or cost a lot to fix. How it gets fixed? WHO CARES.
Maybe I'm wrong. Either way, I don't have pictures. The plumber said it was the seal around the toilet that was off/broken/not put on correctly so instead of having to call a roofer like we thought we would for the mysterious leak that would show up during rain storms???? he fixed it and all we have left to do is the dry wall. Well, not we as in WE but the dry wall guy. Remember when Sean fell through the attic? We're gonna use the same guy who fixed the dry wall then. God love him. Not the guy, Sean. That was so funny and I'd kind of forgotten about how funny it was. Now I'm laughing and Joy is looking at me like, "Oh good, you finally get my joke!"
Anyway.
Here are some pictures of the kids from this week so far... 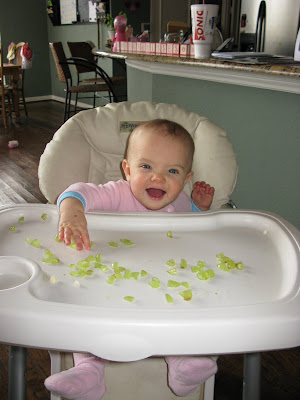 Joy eating her smaller-than-bite-sized grapes that I furiously cut up so she won't have the chance of choking on them. It takes her about 15 seconds to pick up each piece they're so small so it's also a great time-killer. 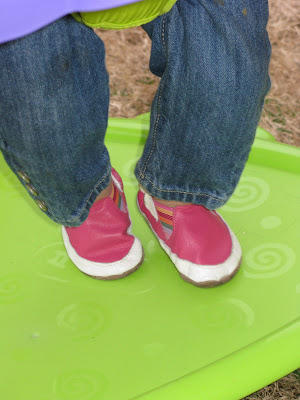 Here are her latest Ross shoes-Robeez that I got for 9 dollars that I think are pretty cute and match everything an almost 9-month-old girl has in her closet. Almost 9 months old. Wow. Time has flown with this little toot. 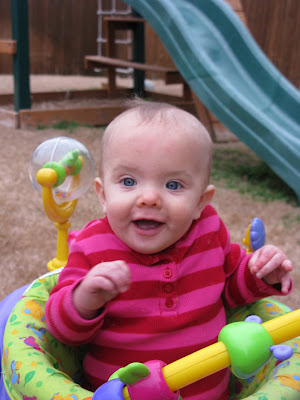 Oh hi honey. There you are! She doesn't really like saucers anymore but I trap her in them outside so she doesn't hurt herself or crawl into Max's deposits. You know, deposits. You with me? She looks more like Sean in this picture than she really looks like him I think. Hmmm 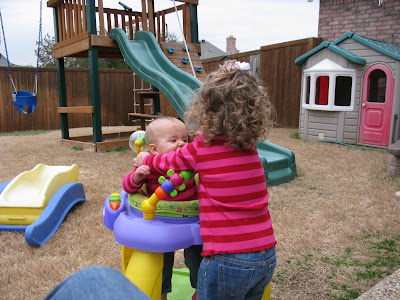 Awwww big hug. If pictures could talk you'd hear me say, "Charlie, I SAID DO NOT PICK BABY JOY UP." I say that approximately 57 times every day now. Charlie is obsessed with picking her up and Joy thinks she's big enough to trust so she just reaches her arms up like, "Sure, let's do this." We have to intervene or there'd be a trip to the ER every other day. 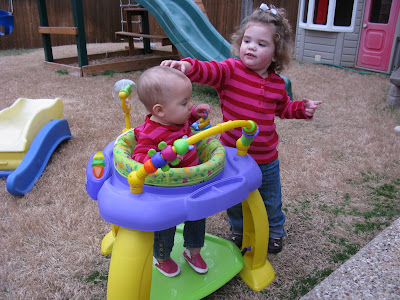 Once Charlie gives up she just kind of pats Joy on the head. Like a dog. She calls her "Sister, Baby Joy, or Friend." I don't know where she gets that. :) 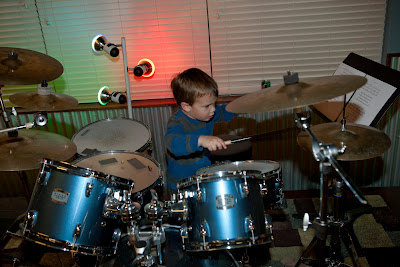 I had the brilliant idea to have Sean take pictures of Ty playing the drums this past Sunday so we could print a picture for Ty to look at. Y'all, he is so proud of it he takes it everywhere.
"There's Ty playing the drums. That's ME that's Ty playing the drums at church. The blue drums and the sticks and the cymbals. That's ME!"
It's his most prized possession right now and I'm sending it with him to school Thursday for show and tell. Isn't it hilarious that his little class of three year-olds has show and tell? Oh to be a fly on the wall!
Okay the girls are up. Northpark date with Aunt Emmy. It'll be great to get out of this house!

You definitely get the drink. I care not at all about the ceiling pics, just about the story and that everyone is fine and it will be, too.

Drink one for me. Jealous.

I agree- I would much rather see cute pic of your kiddos than the wet ceiling... :)

I say pictures of kiddos are way more fun! Sounds like the house is playing tricks on you!