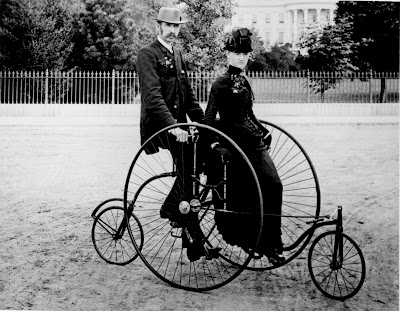 photo credit here
You've heard that phrase I'm sure. It's just like riding a bike-when you get back on you'll remember what to do...
Well so far it's proving true when talking about actually riding a bike.
Yesterday in a wave of newfound energy and determination to be athletic again, I had Sean get my bike out of the attic. I think it's been up there for two years. Maybe three. I forget how long we've lived in our house. It's for sure been up there since we moved here. If you remember, we moved here two weeks before Charlie was born.
That explains why I wasn't needing my bike when we moved. Lots of danger involved when a 38 weeks-pregnant person wants to ride a mountain bike.
Giving you time to get a good visual.
There it is.
Okay anyway. I aired up the tires, dusted off the old helmet and took a ride.
It was perfect weather so that helped. It was also just plain fun to ride my bike again. The only hiccup was when I reached the busy intersection by our house. I kind of forgot what to do at red lights but I acted like I knew what to do and think I pulled it off. You could ask the guys in the convertible who laughed at me pretty hard when I rammed my tire right into the curb and nearly bit it.
The important thing is that I caught myself.
I rode around our neighborhood and felt like I had trained for my first triathlon by the time I got home. Turns out I was gone exactly 18 minutes and had travelled maybe 5 miles. I've got a long way to go before I turn pro.
Also included in my newfound athleticism is my renewed interest in tennis, the game of my youth. Since I had to dust off my racquet bag from high school I figured it was smart to get new strings. Technically I also played in college. But not like "played in college," more like I took a tennis class each semester so that I could play and get an easy A. Which turned out to be B's that I had to work really hard for. I played tennis every day through high school and felt like I could handle taking an advanced tennis class at A & M. What I didn't factor in was that there were a lot of college students who played every day in high school who would be taking an advanced tennis class for an easy A. Most of them were much better players than I was and our grade was determined by how well we did playing each other. I felt like I had to watch tournaments on TV to learn some new strategies so that I didn't fail!
Anyway.
Ty and I went to Academy yesterday afternoon to drop it off and he threw a fit when it was time to actually hand the racquet over. Didn't realize how much he was looking forward to my return to the athletic world. Also didn't realize that I took him into a sporting goods store without some idea of how to get him back out. "Wanna see the footballs, wanna see the fishing poles, wanna see the shoes, wanna go get the helmets mommy..."
It was tons-o-fun.
Posted by Mary at 4:20 PM

OK...so I just have to tell you that my first semester at A&M I signed up for an Aerobic Walking class. Walking..how hard can that be? Seriously, it kicked my hiney! These were some super speed walking fools. I decided to take it down a notch the next semester and tried out badminton (sp?)...wasn't even sure what badminton was, but they had spots open at a time slot that worked for my schedule. I tried really hard and barely got a B in that class. There were several in that class who took extreme pride in stuffing that shuttle down our little white girl throats. I finished out my PE credits with beginner golf and actually did well in that class, but geez...what is up with A&M and their super hard PE program??

Cute post!!! Makes me want to get my bike down! It has been hanging in our garage since we moved here 5+ years ago.

Oh Joy that is funny. My brother took badminton too. He said it was hard! I also took handball-very fun. Raquetball without the raquet.

Agreed with We 3 Smiths- aerobic walking at A&M kicked my butt! I took it 3 times b/c once I learned it, I was gonna get some mileage out of it- literally, I guess! I did have to drop bowling- not as easy as it may seem. Well, dropping it was a cinch. So were gutter balls.

Anyway, as always, got a kick out of your post. You make me smile. :)

Lastly, I do think about what R&L will say about their early years- hoping they remember it all!!!