I thought they were asleep or close to it. Imagine my surprise when I heard them giggling from downstairs. I ran up to tell them to stop and to go to bed. It was 9:30. When I rounded the corner and saw them playing, though, I stopped and just watched. It was one of the cutest little play dates, her with her "treasures," (a collection of trinkets and jewelry,) and him with his "choir," (every Disney character we own.) They giggled and acted out scenes from different shows. I turned around a went back downstairs. Mom and I have been watching Downton Abbey this week so she can catch up to the current episodes...and boy howdy are we both loving it! Anyway, back downstairs to catch the latest news from Downton I went.

Then we looked up about ten minutes later and saw this. 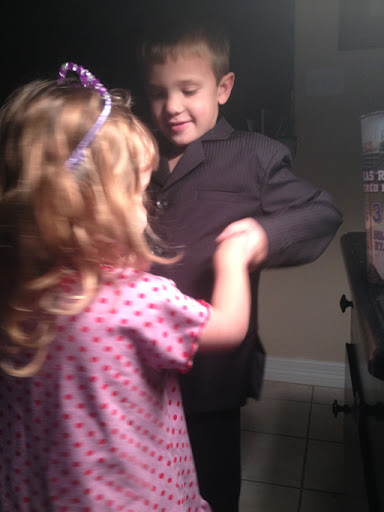 They announced that this was their show they'd been practicing for us. Their dance. Y'all, it was the cutest thing ever. Poor Charlie slept though the whole thing--even the multiple wardrobe changes that clearly took place. Even though the lights were on in every room upstairs and Ty and Joy made enough noise to wake the neighborhood. She'll be sad she missed it in the morning.

Oh my goodness... How precious! And good for you for not stepping in and shutting it down!