This Thanksgiving there were many things to be thankful for. Topping my list was my family. See why? 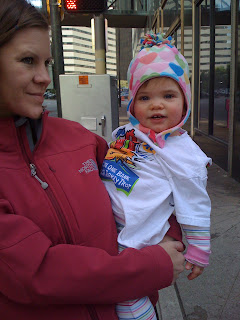 Aunt Emmy risked her back and held Charlie during the parade of runners at the Turkey Trot. Notice we weren't running--we were WATCHING. It was a success as far as minimal crying and the entertainment factor was very high. Max had the time of his life and thank You, God I was not in charge of keeping him contained. This was Sean's first Turkey Trot with the Jenkins and when we were leaving I asked him which was worse: Turkey Trot or State Fair. He said he'd be happy to do the Turkey Trot again year after year...He didn't say that about the State Fair. Growing up in the same area he had never done either one! That's un-American. 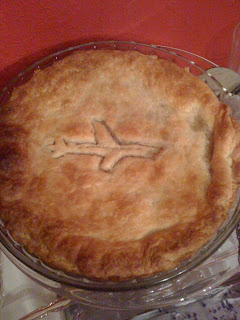 My parents made Sean a cherry pie, his favorite dessert. Then, to show their dedication to the perfect Thanksgiving meal, they drew an airplane on the top. Isn't that cute?
Charlie's birthday will always be around Thanksgiving so for her first one, we set the bar pretty low. Since she doesn't eat food with her hands (?) she got a little bite of icing and a few stuffed animals and she's a happy camper. Nothing wrong with being low-maintenance!
I'm of course thankful for the health of my kids and so far, this new baby appears healthy. Last Thanksgiving I waddled around my house watching everyone else fix the meal. Since I wasn't allowed to travel more than 20 minutes away from the hospital, everyone came to me. It was freeing to get to go to both sets of parents' houses and haul the kids around to see everyone. Tiring, but great. Yesterday we stayed home all day and put up the Christmas decorations. Hoping to take pictures later today and show you what it looks like!
Posted by Mary at 12:12 PM

I LOVE the new background. I love the picture of Charlie and me together. However, I realized, while admiring it, that Charlie and I are the only two single girls in our family. We'll have some fun times together. I just hope she doesn't get married before I do.

At least you are mobile. That's a big head start you have on her. Oh and you can feed yourself.

Fun! That's cute that they put the airplane in the pie for Sean! I'll have to come see your decorations...it was nice to coome home from Oregon and have ours all up! Hope you are feeling better.

SO FUN! Im glad yall had such a great Thanksgiving! We LOVED doing the Turkey Trot. I did it with my dad growing up and then Freeland & I did it last year (with the dogs - big mistake since everyone says "are those horses" and its all you hear all day) But maybe one of these days we will be back and can all go together!

HAPPY BIRTHDAY CHARLIE! She is so stinkin adorable! And I loved reading your post to her!