Eggs and His First Golf Lesson

Excuse the quality of these pictures--Use this disclaimer for all future posts because often my pictures are taken with my phone since it's handy. Plus if Sean is around he is taking the pictures and he doesn't find some of the things I capture picture-worthy. Ha! What does HE know :) Things like these two pictures are what make my day. 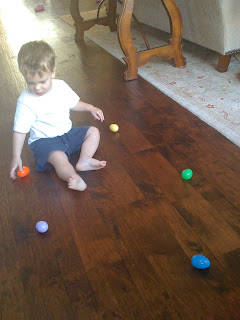 My Mom started showing Ty and Charlie Easter eggs last weekend (during the weekend from down under,) hoping they will get into hunting them this year. They both love them--for different reasons. Ty likes to organize them. By size, color, etc. Charlie likes to just bang two together, much like her brother last year. Yesterday at Mimi and Pop's house, (Sean's parents) we broke out the egg collection and had a great time. Until other cousins joined in...what age do they understand sharing? Ever? Anyway, it was big fun and I'm really hoping Joy stays in the belly until after Easter so I can watch the kids hunt this year! 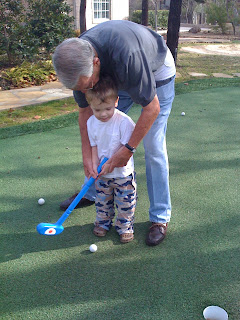 Isn't this a sweet picture? Sean's dad loves golf and felt it part of the plan that when they moved to a new house 5 or so years ago they put a putting green in the back yard. I'm not sure he pictured what would actually take place on it for the following years but imagine lots of lost golf balls, miniature plastic putters, and "THAT WAS MY BALL!" meltdowns. And Pops eats it right up. Ty giggled every time he actually hit the ball and would say, "Yay Pops." I sent this picture to Sean and he said it made him so sad he wasn't there with us. Sometimes when I send him a picture so he feels like he's not missing things it makes it worse that he isn't there. Not my intention babe!
Forgive the delay on telling you about our visit with the pediatric surgeon--It was great and relieving and has given us more hope than we have had before for Joy. When he walked into the room, my first thought was that he looks like my OB, which will help since after surgery I'll be drugged and can talk to them interchangeably..."Dr, how did the surgery go? Is all okay? Can you give me more pain meds?" You know, the important stuff. I kid. He does look, act, and calm me down like my OB though. They know each other and respect each other and that does matter to me. When you're envisioning your child in surgery of any kind don't you want someone that other people consider GREAT at their job??
I guess I should start calling the doctors in our lives by their names or titles to keep things less confusing. Maybe I'll think of some nicknames. Anyway, the ped. surgeon-let's call him that for now-said he has done "many" operations on babies similar to what Joy will have, he can operate at our hospital, and he doesn't expect to have to do the surgery immediately after birth. He explained CCAM more to us and said they often don't cause severe respiratory distress immediately after birth and that he will likely be on call for her delivery just in case but will probably do a CT scan when she is 3 months old to see the tumor then operate when she is about 6 months old. He actually said, "This is not too big a deal..." about three times. She will have 1 or 2 small scars and the surgery will take 2-3 hours. I can't tell you how different this looks from what we were imagining! He assured us that if for some reason she does need immediate surgery he can be there and do it and she should do fine. In the meantime, the NICU at the hospital is equipped to handle whatever symptoms she has and keep her stable until he gets there. If my diabetes stays under control and no more fluid appears in Joy's body they project that we will schedule her delivery at 36-37 weeks...mid-April.
Thank You Lord. We are continuing to pray that she stays happy inside for as long as possible, but we have crossed the huge milestone (28 weeks,) that all of the doctors involved were hoping for. Our prayers and your prayers have been answered over and over again and we couldn't be more thankful.
Posted by Mary at 6:59 AM

Oh happy news! Isn't that feeling of some relief huge? I'm so happy that everyone's prayers are being answered, however, I plan to continue on until well after Joy is in your arms!

I love the golfing picture...so so sweet. A Tiger Woods in the making?! I'm happy to hear the excellent news about the talk with the ped surgeon. And the prospect of not having to have surgery right away is fantastic. God is truly awe-some.

I love how Pops is teaching Ty to golf. That is cute. I can see where it would make Sean miss you all. So glad Joy is doing so well and if she has to have the surgery is will be so much better than you first thought! You sounded so relieved last night...I could hear it in your voice. I told Jason you sounded less stressed talking about and very optimistic for the first time. :) Have fun with your mom, Henry and Ana today!

Awesome News! The pictures are classic, too! I am so happy that some relief is in your heart!