Hey guys it's Ty here. Momma is translating for me since I don't know how to type. I wanted to tell you it's my Aunt Emmy's Birthday today! Her named is pronounced "Immy," in case you were wondering. She's super fun. 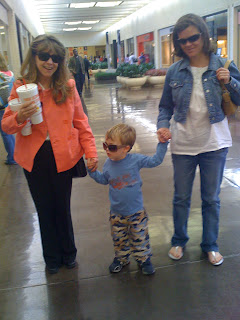 She takes me cool places like Northpark to see the ducks and turtles. Sometimes when momma tells me we're seeing Emmy I say, "ducks, turtles?" and other times I say, "and Phoebe?" When Emmy comes to my house Phoebe comes too. That's her dog. Momma tells me Phoebe used to live with her and Daddy until I was born. Apparently she bites. She doesn't bite Aunt Emmy though--don't worry. 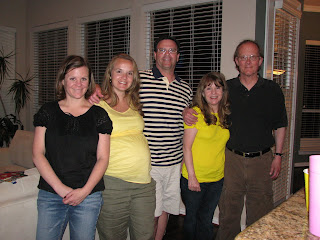 This night was SO FUN for momma and Emmy helped a lot with me as usual so momma could talk to her friends. Emmy teaches me everything I know and I'm always excited to hear her sing even though she doesn't have a great singing voice. She knows lots of cool songs and tells me I'll sing songs like those at school. Since she teaches at school I'm excited to see her every week once the Fall gets here. (She teaches at a real school so he won't see her every week, but don't tell him that. We are using her as motivation to get him excited about MDO)
Aunt Emmy is the greatest. I sure like sitting on her lap watching my movies when she is here. I think I'm her favorite person. And she is mine. Happy Birthday Emmy! We love you!
Posted by Mary at 9:24 AM

wow! Em sounds like a great auntie! and an amazing sister to take the dog when the babes came along! :)

Happy birthday, my long-lost sister! Enjoy a Rt 44 Sonic drink for me...

Happy Birthday Emmy! I've seen you in action helping Mary with the kids! You are amazing! Come to double dip with us again....maybe we'll get to actually visit! Happy Birthday! Love ya!

Thanks, Ty (and Mary!)!! It took me a few days to actually read that post, but it was sooo fuuun to read what you wrote. I ALWAYS have fun with Ty. So glad that you let me be such a big part of the kids' lives.