Life in the circus

Last week Bonnie, (the bride whose wedding prompted me buying a new pretty dress--not the one I showed you but an even better one that I found for $30!! Remind me to show you a picture soon...) came over to play with us while I was home by myself with all of my children...thus making me NOT by myself with all my children. We played outside and when it was time to go up for naps we noticed Charlie was dragging a diaper behind her. You never know where wet diapers are these days--dirty dirty ones go right into the trash but wet ones--well--usually do too. I assumed I'd left one from that morning on the floor or something but once we got closer and Bonnie got the camera we realized it was Charlie's CURRENT diaper dragging the ground. Y'all it was the funniest thing I've seen in weeks. 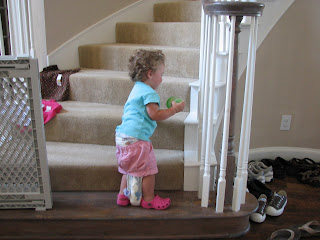 I have no idea how it was still attached on the back. She was trying so hard to go up the stairs and being the mother I am I wouldn't help her until we got a good picture. 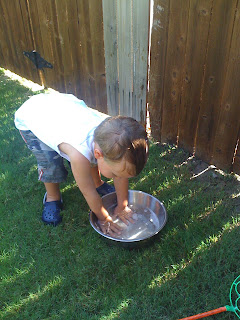 Ty has discovered bubbles. Bubble wands, bubble machines, you can't hide them from him. He kept dipping his head in the clean water bowl after he'd dipped his bubble wand thing in there but thankfully he never got bubbles in his eyes. Now that would have been fun. 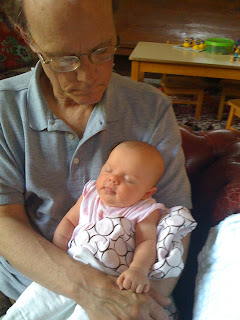 Popeye has been holding Joy trying to soothe her the last few times he's seen her so she will stop crying. He has a really slow heartbeat and he can knock them out cold every time. See. She's getting chunky! 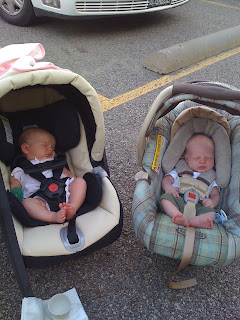 And here is Joy's hubby Cody. He's cute as a button and they've had a few dates already. Supervised of course. Carley and I are hoping they'll behave this well on all of their future dates.
Kind of a random group of pictures I know but that's life these days. I start to write something and a little person needs something so I come back later and think, "What was I going to write?What is this picture from? What's my name?" It might be like this for a while so I apologize in advance. On a huge positive note, Joy is settling down thanks to her meds. She has taken good naps every day (well the last two days,) sleeps between 3 1/2 and 5 hours at night, and is much easier to soothe during feedings. Praise the Lord! I had my 6 week dr. appt. today and got a clean bill of health so I won't be going to my OB's office for a year. I've been averaging once a month for the last three years so I'll miss everybody. If I had another wedding the nurses would all be in it I know them so well. Wow a whole year...Today I told my doctor he's in big trouble if I'm there before then :)
Good story for you: Yesterday Sean was up early and went out front to pull weeds. He left the door cracked so he could hear if anyone woke up so I could sleep in. Love him. Anyway Max was hovering by the front door wanting to go out. Before Sean could stop him Max pushed/pulled the door open with his snout and ran after a man on his bike. Like across the street. Not only did he knock the man off his bike--trying to play I'm sure--knocking the man onto the street, (man scraped his elbow and that was it thank God) a car swerving to miss the man hit Max. Of course Max is fine. He is like a bionic dog. Sean took him to the vet last night and there is nothing wrong with him. We're hoping the man on the bike doesn't sue us...and Max, well, I get so frustrated with him! That isn't news if you've known me for long. I have no doubt he will probably do the same thing again. Lord willing nobody will get hurt!
The feeding bell just went off. That's code for a baby is crying. Bye bye
Posted by Mary at 12:45 PM

It seems crazy right now, but you'll look back and not want to trade it for anything! I love all of the pictures! Ryder is OBSESSED with Bubbles, too! Almost to the point that it gets annoying. He can't blow the bubbles himself yet, so I have to blow them for him. I bought him a bubble machine, to solve the problem...freaks him out. The noise I guess...can't figure out what else it would be!

Charlie's diaper made me laugh out loud! That is so funny. I'm glad Joy is beginning to feel a bit better... I pray the trend continues!

Oh, and it's funny you said how little Trev seems. We were just looking at pics and video of him when Tatum was born and were astounded by what a little guy he was then! I know you understand what it is to look back and realize...holy cow! No wonder that was hard!... I'm sure you'll be looking back VERY soon and thinking the same about your transition to three!

Is that dog related to Marley, as in Marley and Me? Seriously, I would strangle him.

I can't believe it has been 6 weeks already. I'm sure it doesn't feel already to you, but to me, it does! Good job!