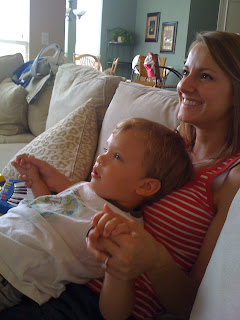 This weekend our friend Bonnie is getting married. We couldn't be more excited for her but Ty is losing his first girlfriend to another man. I haven't told him yet but I'm sure when I do he will cry.

His tears may or may not occur at the same time as a regular fit so it will be hard to tell how much of his heartache is for Bonnie.

See how much he loves her? He asks for her like he asks for Nattie/Popeye/Emmy/Mimi/Pops. The best part is that he has barely even been around her until very recently. If I had a million dollars I'd hire her to be my nanny for the rest of my life. Like I'd keep her around even after the kids graduate from college and everything. I'd let Jake (future hubby,) come too. I'm all for supporting her marriage :)

I met Bonnie when I first started going to my church when she was in high school. During her senior year we took a tap class together and I had more fun than you can imagine driving back and forth to the dance studio and making a fool of myself in front of her. It was one of my absolute favorite times in the last few years. Sadly I had to miss the recital at the end of the year--otherwise I'd certainly post pictures of the event to embarrass both of us. You can't have it all.

Another favorite memory of Bonnie is when I drove with her and her mom Priscilla to Denver to visit another friend of ours who I'd worked with at church. Brandi, a great friend and post-worthy girl all her own, had just had her first baby so we were going to meet miss Madren. We drove there and back in I think four days to visit the Pembertons and the day we left I took a pregnancy test and it was positive.

Master Ty in the making. Well in the baking.

Gonna leave that one alone.

I had not told Sean I was pregnant because I took the test early in the morning and he had already gone on a trip. I didn't want to tell him over the phone so I did what every respectable newly pregnant girl would do: I told Priscilla and Bonnie before I told my own husband. I couldn't stand having this huge secret! I had not even told my own mother because I didn't want to tell her over the phone either! It was like a fire hydrant gone wrong every time I opened my mouth that morning. Excitement just spewed out. I still feel bad I didn't tell Sean first. He doesn't care for the record. On our way back into Texas I called Sean and was so revved up I picked a fight with him and then we had to finish the fight before I could tell him I was pregnant. Oh the memories.

I got to share in this new phase with two precious friends, a mother and a daughter. Both of them are gems. Both are beautiful and godly and constants in my life. Both are some of the first people at the hospital when I have a new baby. Both are people that I wish you knew in real life so you could laugh like I do at/with them. Mostly with them. Both of them were at my wedding and their husband/daddy Mark was one of the poor souls who married us that fateful day in August nearly four years ago. In the little chapel where it was 96 degrees in the coolest corner of the building. Again, the memories.

Tomorrow night is one of her showers and then the wedding is on Sunday. It'll be a big night for us since Nattie and Popeye are coming to keep the kids ALLOFTHEM and we'll dress up and I'll maybe even blow dry my hair and put makeup on. Gasp. Won't that be fun??! Yes indeed it will.

I'd promise to take pictures but then I'd feel bad if I do something totally like myself and forget my camera. How 'bout I promise to try to remember my camera. That will have to do.

Happy weekend until we meet again...

I really love your rambling, subject-jumping posts. They crack me up and all make sense at the same time! You are a very entertaining writer!

That was a fun memory lane blog. I remember you getting in that fight with sean before telling him you were pregnant. Oh, the days...

Fun post....bonnie and priscilla are 2 of my favorite people too so it made me excited for the fun party tonight and wedding on sunday!!