Plans for the summer 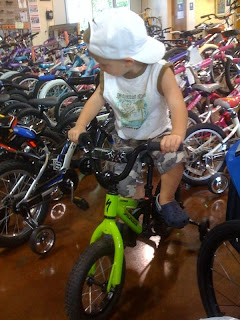 We're gonna be taking some family bike rides. I'm thinking about getting Ty this bike that he claimed on a trip to Richardson Bike Mart. Doesn't he look cute? 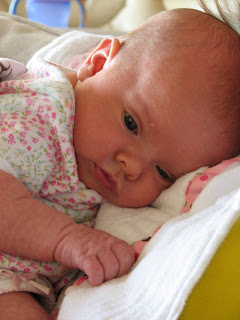 Gonna be holding this one, feeding her and teaching her how to play and watching her grow. Some of you have e-mailed asking about Joy's health/tumor situation and our plan is to have the surgeon who would have done the surgery do a CT scan on her chest at 3 months old to see if there is anything there, (apparently sonograms can miss things so it's possible there is a little bit of the cysts there but it still could be totally gone,) so if he does see anything we will go back to him when she is 6 months old for another CT scan and surgery. Obviously we are hoping that the sonogram was accurate and there is nothing there but until the 3 month scan we aren't given a 100 % clean bill of health. Other than that, she is completely perfect. At least I think so. 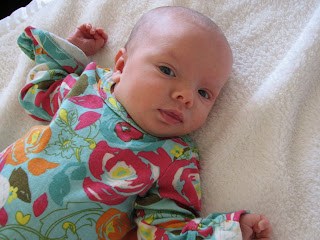 "What'you talking about Willis?"
Of course my pictures are out of order. This one is from two weeks ago so she's a little chunkier now and she's stopped peeling. The lizard phase lasted a few weeks but now she's getting the really soft skin and I'm a little jealous of her complexion. Mine goes in and out of hormoneville.
As far as other plans for the summer? I told Sean yesterday I feel like we're coming out of survival mode, starting to think ahead about things and feeling just a teeny bit more confident.
Of course that backfires when you say it out loud. Remember the last few posts? I know that's what y'all were thinking.
We don't really have any big plans at all for the summer and I think I'm the only one in the family with a bike. Ha! The one Ty found is so cute though so we'll see. His birthday is in September and I do love to go on a good bike ride. Sean was actually at R Bike Mart to get tubes for the jogging stroller tires so at the very least we'll start going on walks soon. In a week I'm cleared for physical activity and I'm kinda excited about it!
If I'm MIA for a few days it's because we're trying out a new plan while Sean is gone on this trip and it might require more rest on my part. i.e. sleeping any chance I get instead of functioning in the world...just when I declared coming out of survival mode. I promise to have new pictures of Joy when I return!
Posted by Mary at 9:28 AM

Sounds like a perfect Summer! Get your rest and don't worry about functioning with the rest of the world...it will all come together with due time! Pretty soon the midnight hours will be yours again, but take care of yourself until then!

She is such a beauty! Hang in there girl. You only have a few more weeks of those crazy nights and then things will be in somewhat of a predictable routine! I would really love to get together.

I'm sorry you had a rough night...I know how hard it is to get moving the next day when you've been up all night! That picture of Ty is so cute...he looks like such a little stud. And that last post with Charlie brushing her teeth- I am sooo sooo jealous of those curls. Wow!