My new blogging friend Brittney tagged me for a TRUTH post about myself and as much as I'd like to remain appearing cooler than I really am I thought I'd give it a try. I "met" Brittney because my friend Jodi shared our story at her Bible study to ask for prayer. Isn't it great to have friends that tell their friends to pray for you? People you might never even meet are coming together for your baby--it's overwhelming. Thank you, new friend. Technically I also met Brittney when she found my blog through Brooke, my new cousin, who also asked people to pray for Joy. Small world isn't it?
The rules of the TRUTH post:
1. Tell 10 facts about yourself that are interesting or maybe just weird.
2. Tag 7 other bloggers that you think would have better stories than yours.
3. Tell the 7 others that you tagged them so they know in case they stopped reading your blog weeks ago because you have been forgetting to post.
4. Remember what is shared so you can use it in the future in large gatherings like weddings or kids' birthday parties.
**DISCLAIMER**This is my own spin on the TRUTH post. You can also interpret the rules as TELL THE TRUTH, TELL OTHER PEOPLE TO DO THE SAME, AND LEARN SOME FUNNY THINGS ABOUT YOUR FRIENDS, REAL LIFE OR BLOGGERS.**
1. I learned how to knit about three years ago. A sweet teen aged client taught me and it helped her feel comfortable while we talked in session and it helped pass the time once I was on bed rest while pregnant with Ty. Here are some of the scarves I've made over the years. The sad thing is I have NO IDEA how to make anything but a scarf. And not because there is a lack of books or magazines about knitting in my possession. 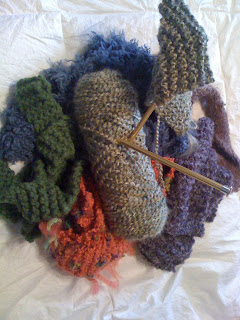 2. I have a little boy who looks JUST like my older brother. If I knew how to put two pictures side by side I would show you. There's a picture of Ty at the same age over in my profile. See what I mean? Weird. When we show Ty pictures of Graham as a kid and ask who it is he says, "Ty." 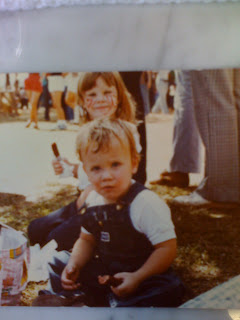 3. Ty and his Momma have a lot in common. Fear of strange men, (that's me, the youngest, wishing Santa would mind his own business.) We both love to sleep more than almost anything else. Ty has been excited to go to bed, for nap or bedtime for about 6 months. Like he never cries or fights it--When we say, "Let's go night-night," he runs to his room and jumps by his bed until someone puts him in. Mom says I did the same thing as a kid, often asking if it was ok to go to bed before bedtime. 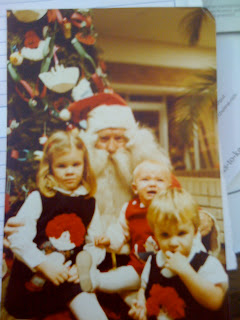 4. I put Cool Whip on everything. Everything that normal people put it on but also pretty much anything I eat. Except vegetables and meat. It makes a bowl of cereal taste like dessert. Try it. You'll love it.
5. I worked for three + years to finish grad school and get licensed as a counselor. No less than two weeks after I finished my hours, I had to stop working because I got put on bed rest with Ty. I practiced as an LPC for two weeks. Long career. When I tell people that is all I practiced they give me a "Are you sure you didn't do something illegal?" look. Bed rest people. That's the real reason.
6. I was in a wreck on Highway 6 when I was in college that should have killed me. I was wrestling with God about my future and staying focused in school during that time and after seeing what could have happened I realized I needed to stop complaining and pay attention to what He was telling me. I kept a piece of the wooden fence that I flipped over as a reminder. How's that for a weird decoration?
7. If I don't eat first thing in the morning I am not a nice person. It doesn't matter who I run into I don't want to talk or really even focus on another person, my children included, without eating first. And for YEARS I have eaten the exact same thing for breakfast almost every day: Two whole wheat waffles, two eggs, and a Diet Dr. Pepper. Breakfast of champions. Yes, I put Cool Whip on the waffles. And peanut butter if I'm feeling frisky.
8. My husband and I dated for four months, got engaged, married four months later, then got pregnant four months after we got married. I don't do math but I think that's close to a year that we went from zero to family.  Then a little over a year after that we had another baby. Nine months after that we got pregnant again. And it's been glorious. Hard, but glorious. For the record, we were friends for about four years before we ever dated.
9. I wanted to be many things when I was growing up. Among the list are an American Gladiator, a Broadway dancer--on A Chorus Line--, and a professional tennis player. Call me a dreamer. I am now a stay-at-home mom with high ambitions about being athletic again one day.
10.  I am mortified at the thought of having three kids under three years old. I don't remember things, I lose things, and I am selfish. An example of why I'm afraid is from yesterday: I was taking Ty to Mom2Mom Bible study with me (Charlie and Daddy had bonding time since she's banned from the nursery and he was home!) so I loaded him in the car, loaded my stuff, drove to the church and parked. When I opened his door to get him out I found him sitting quietly in his car seat without ANY buckles buckled. I had opened his door so he could climb in and closed the door behind him so he wouldn't fall out when I was loading, which I do all the time. Usually, though, I actually remember to FINISH putting him in the car by buckling him into his car seat. Mother of the year, huh?
I do love being a mom. I don't feel like I'm good at it or that I have conquered the never-ending needs that little kids have but I have enjoyed it more than I ever imagined. This picture is one of my favorites even though it gives me a complex about my rear-end. We are walking through life trying to protect the people we love. We do our best and rely on God to pick up our slack. And He always does. 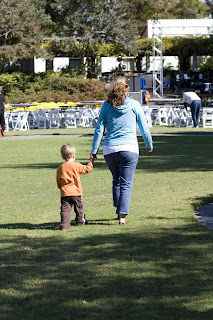 There you have it. New dirt on me. Now it's time for other people to join in:
Brooke
Mama Em
Emily M.
Casey
Heather
Dana
Jamie
NOW YOU'RE IT!
Posted by Mary at 9:48 AM

Such a small world! I know Brittney because the church her husband Matt is the youth pastor at is the church I went to in highschool. They started working there after I was in college.. but I still got to know them some when I went home for the summer & did trips and that whole bit. Sadly, I never ended up moving back home so I didnt get to keep up with them until these glorious blogs started happening!

I love all your facts! Oh and Im the same way if I dont eat in the morning. Im not too nice but I also think Im going to throw up and die if I dont eat. Its made Freeland question if I was pregnant one too many times.. but I know its just because my body is screaming at me for food! :) Thanks for tagging me.

I too have done the seat belt thing! So scary when I realize what could have happened, but didn't. Then I have to have a little worship service, thanking God for his protection inspite of my lack of brain cells.