Two and a Half + A Little More 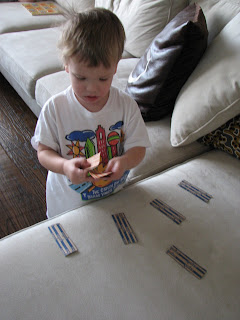 At two and a half Ty is doing all sorts of fun things. He's a big organizer. Give him ten of something and he'll spend 45 minutes counting it and lining it up. He has a hard time when his bulldozer of a sister comes along and messes it all up but he's starting to take it all in stride and tolerate her messiness. Those are the rolling papers (I have no idea what they're called,) that I told you about during my CoinStar shortage. Thank You Jesus I found one because that rolling your own stuff is for the birds. 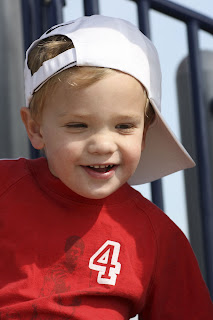 He just got a hat just like his daddy's and man is he cute in it. It's a Tiger Woods golf hat, youth sized...notice it's not kid sized because his head is like the size of the High School boys at church. He is mighty proud of it and asks for it when he gets up from his nap. We were hard pressed to get him to wear any kind of hat all winter and this one showed up and he asks for it????? I think he is starting to get the "Daddy has one, I want one," thing. Really cute. Sean calls it his "Ty" hat because it is technically his initials: TW=Tiger Woods and Ty Wilborn. I'd have never put that together. 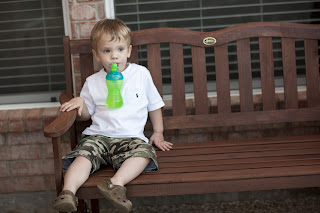 He is kind of mellow most of the time now, which is not a word I would've used to describe him even 6 months ago. His heart is very sweet and he eats it up when he knows he has done what we're asking him to do. He still follows most things up with "Yay Ty," it's become his trademark. Other things he says/does:

"Hey Mommy/Daddy/Charlie/Max!" when he sees us for the first time in the morning.

Quickly followed by "Good Morning." He wakes up in a great mood in the morning...not always the case after a nap but for the most part he is raring to go the second he wakes up.

He's finally repeating everything so today he said the words giraffe, manatee, and dolphin in about a ten minute period (Thank you Baby Einstein,) and since he only said daddy, cracker and help at age two this is quite an improvement!

My favorite things at this age are how he tries to relate so much more to us and other people, his little patterns that make him the least bit predictable, his sleep habits, his sheer joy when we pick him up from church and bible study, the fact that he doesn't get kicked out of the nursery anymore, (because he was so upset when we left him,) and that every day he learns something about the world. Even little things start to click and he just gets so excited. He is a trip and I'm so thankful that he is my son.
Posted by Mary at 8:19 PM

Sweet post! Ty has totally changed the last few months and it's been fun watching him learn and talk more! I love his little Ty-isms! AND he is so cute in his new hat....and so proud of it! I love it!

You can see his features so much more clearly with the hat on...super cute! I remember those Thank You/You're Welcome days. Funny!

Don't you just love this age? Brody is 26 months, and I am LOVING this stage! He picks up on something everyday and says the cutest things. We should get our boys together sometime!

I loved this post- it had me laughing out loud. Ty is such a cutie! And just think- you get to watch two more adorable little personalities unfold... awesome.

Yay, Ty! He has come such a long way.

I love this post and it makes me feel better! Sometimes, I think Ryder doesn't talk at all...he is exactly 1.5. I've decided he is just kind of reserved. I'll hear him say words when nobody is around, but ask him to say it for you and you won't get anything! I'm glad to see Ty's progress! He is absolutely precious, Mary! One day I need to make a trek up to you and Heather's part of the world so all of these boys can have a playdate!